Keeper of the Purple Twilight 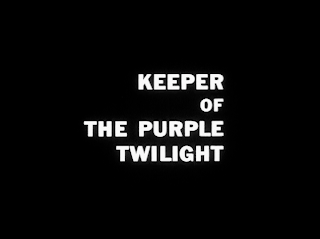 Ikar (Webber), leading the charge of an alien invasion, solves the equations of a despondent scientist (Stevens) in exchange for human emotions. Little did he realize that doing so might just derail his whole plan for world domination.

PE: I love that opening shot. Very Thriller-esque. And no dawgies amid the cacti. But where exactly is the Purple Twilight? And who keeps it?
JS: That's because it was shot on a soundstage, Peter. But I agree, it was an atmospheric opening. Of course that atmosphere did not permeate the entire episode. 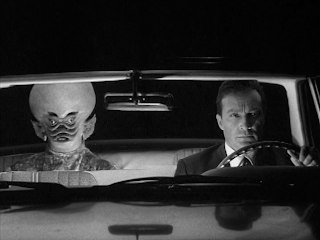 PE: Another great shot that brought back memories of Thriller ("The Well of Doom" perhaps?): Ikar materializes into Eric's back seat while the scientist is driving way past the speed limit, chastises him for breaking the law and then vanishes, leaving the brainiac shaking his head (but adjusting his speed). Just me picking nits but why would Ikar re-materialize into the back seat of the car, then open the door and get out?

JS: Clearly he was enjoying the Driving Miss Daisy vibe. Eric, on the other hand, was in that funk knowing he was two equations away from the answer to his life's work... We've all been there—unfortunately we all don't find salvation in the form of a big-brained alien in a velour track suit. PE: Little known fact: Janet Doweling (Gail Kobe) got sick and tired of her pigheaded husband Mike (Richard Jaeckel), had a romp in the rain with Colonel MacWilliams, gave up fighting killer plants, divorced Mike, and settled down with another egghead (Stevens). This girl's got real bad luck. She can't dress worth a damn either. What's with the dress with the bow bigger than Ikar's head? From the picture to my left, it looks like a little wishful thinking on Janet's part.

JS: I thought she did that to give herself as a gift to Ikar.

PE: Back to back episodes populated by scientists who can't seem to find a little room in their hearts for the fairer sex. This dope pushes his sweetheart right into the arms of Klaatu Ikar. Eric's highstrung, acts like a selfish little school boy (in one scene, he actually runs to his room and locks the door, telling Janet "Leave me alone, I don't like girls!"), and abuses his girlfriend time and again. You can see why Janet's sweet on him. She's pretty good-looking but she's got terrible peripheral vision. She walks into Eric's lab, after hearing him arguing with Ikar, and doesn't even see the man standing right across from her until Eric introduces them. That might explain her bad dressing habits. The triangle that's formed, when Janet falls for the alien, is an odd one to say the least. Ikar and Eric switch roles (not that Eric was much of a boyfriend in the first place), Ikar adopts a passion for the blonde and Eric can't be bothered. 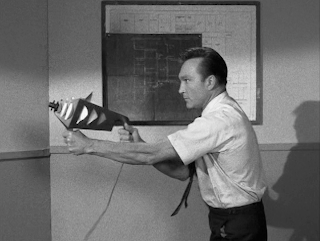 JS: Webber does a great job as the alien learning about human emotions, and Stevens does a nice job portraying a man free of them. I like when Eric grabs the alien rifle and takes care of business. And as we all know—in the OL universe, nothing gets the job done like a Thetan Ray Gun™.

PE: The discussions of love are tedious affairs but they produce some howlers:


Ikar: The woman who was here, you said you loved her.

Eric: I have no more love to give her.

Ikar: How much did she get from you?

Eric: I have no way of measuring.

Ikar: Then you can't say that you gave me all of this emotion.

Eric: I cannot say yes or no. 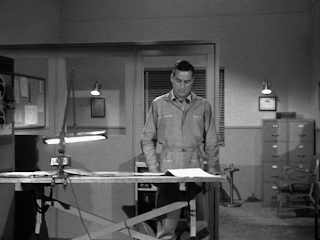 So Ikar heads off to Janet's place, learns the definition of Peeping Tom, and asks the woman to give him Eric's love back:


Ikar: Please define it for me.

Ikar: Well, I want only that love that belongs to Eric Plummer.

Janet: Because that's what love is for.

The show gets progressively more tedious, boring, and just plain dopey. At one point, Janet inexplicably decides the best thing to do with a dangerous alien is take him on a picnic (Ikar eating the fried chicken, bones and all, is a nice touch). 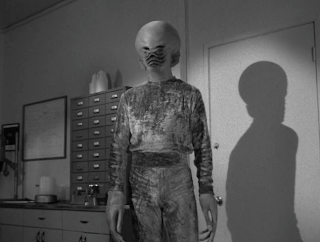 JS: I used to confuse these aliens with those from "The Chameleon." But whereas those worked really well in that they didn't obscure the actor's mouths, these are back to full overhead masks that have a silly mouth motion when they're talking. On the bright side, the alien voice is one of the better ones.

When the alien thugs show up (recognizable by their egg-heads, as opposed to Ikar's inflata-brain), I was looking forward to a Sergio Leone-style showdown. Unfortunately, the visual effect for their weapon looks like a nice, old fashioned beam scratched right into the film itself. 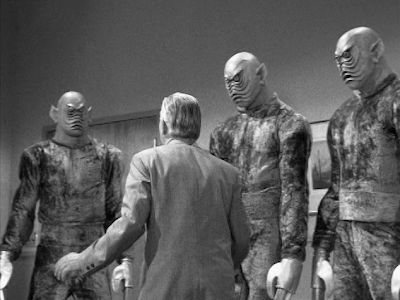 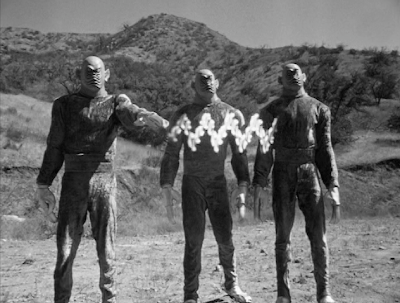 PE: So much of this episode reminds me of golden moments from such 1950s classics as Robot Monster: the the bad spfx, the goofy suits, and the blaringly annoying Universal-International rip-off score (at any moment Clint Eastwood could have dove down from the heavens in his jet fighter and taken care of the marauding aliens).

JS: My L-OL moment: Security conscious Hunt asks Eric if he's vetted Ikar, and he's dismissed with the notion that the project isn't classified—yet. Um, does that mean you share info with enemy agents? Fortunately it all works out because shortly thereafter, Ikar spills the beans on the alien invasion to his new gal pal.
PE: "Oh. Ikar!" has the ring of "Oh Eck, you're wonderful!"
JS RATING:

David J. Schow on "Keeper of the Purple Twilight": 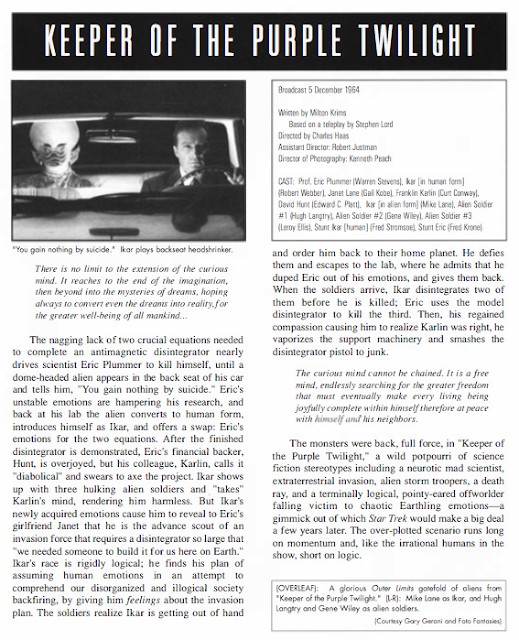 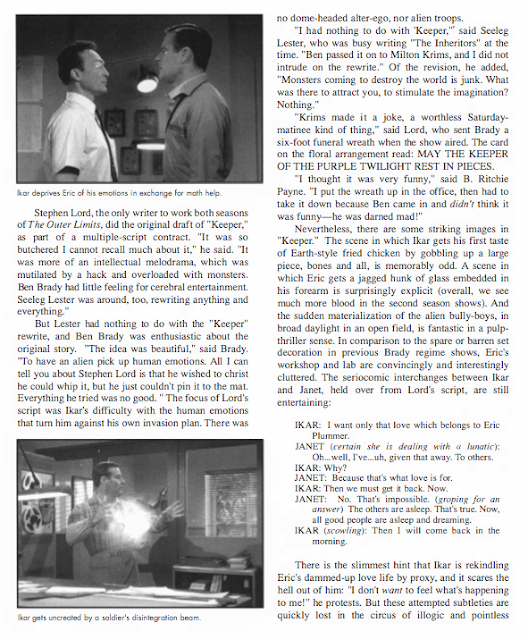 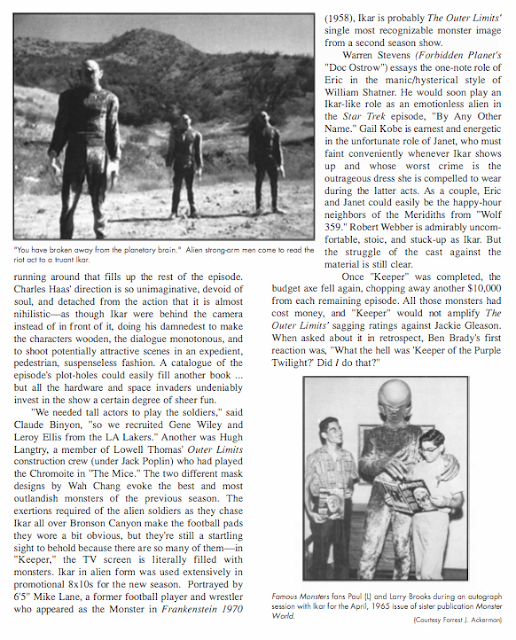