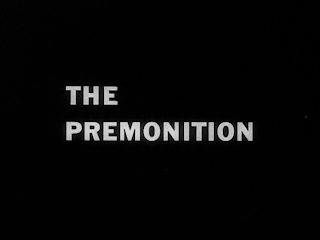 After test pilot Jim Darcy (Martin) crashes his X-15 in the desert, he and his wife (Murphy) are trapped in a world apparently frozen in time. Or is it?
PE: Let me just comment on the opening. Most of the OL openings have something fantastical or ominous: a murder, an alien with a big head walking through a gate in the desert, spaceships that can pull u-turns on a dime, Yoko Ono recording a song you can sing. What does this have? Two and a half minutes of stock Air Force footage of jets and pilots. The last shot before we go to "There is nothing wrong..." is a jet firing a missile. Key ominous music. A let down to be sure.

JS: That 'missile' is Darcy's X-15 rocket. I actually enjoyed the ample selection of stock footage (with stock music, I'm sure -PE) of the X-15. I only wish that they hadn't cut in the handful of studio shots that could pass for an actor sitting on the toilet. Worse yet is when the canted angle levels out when the voice-over calls for the pilot to start leveling out. Considering the flight suit and helmet, they should have stuck with stock footage. For the trivia buffs out there, all three actual X-15's can be seen amongst the various shots used. There are some nice videos on YouTube for the aviation/space fans out there (unfortunately many with embedding disabled). Here's a nice general history on the X-15 era: 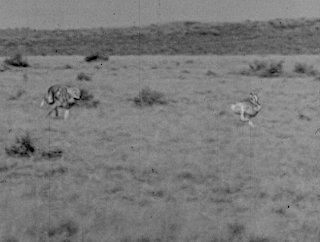 PE: Really bad music alert! Larry B.'s theremin mixed with music box tunes. Are they still paying someone to score this series? Who's minding the fort? (Don't forget the wailing of La Llorona as Linda drives out to meet her hubby? -JS) And speaking of stock footage, let's not forget the  shot of a coyote chasing a rabbit across the plains and bird of prey swooping in for the kill borrowed from Mutual of Omaha's Wild Kingdom. There are times when the footage of Jim's aircraft is so badly edited together, you have absolutely no idea what the hell is going on. Is he landing? Is he flying sideways? All is safe though, as he lands amid props left over from "Cry of Silence." Where's that coyote? 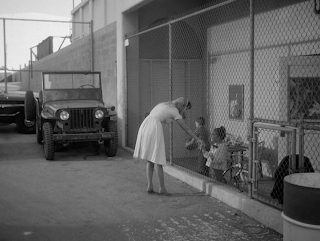 JS: I want to know what kind of parent leaves their kid off at day care that cages them like animals?

PE: L-OL scenes: Like an Esther Williams musical, on cue the air traffic guys swivel in their seats to watch the action on the monitor. I expected the three of them to shout "There's No Business Like Show Business..." 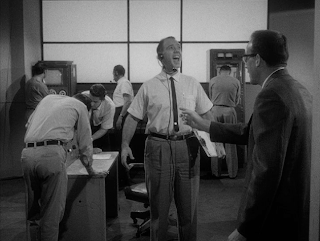 JS: It appears that one of them had, as evidenced when they walk into the control room to find one of the men mid-song...

PE: As if seeing frozen soldiers, coyotes and jackrabbits wasn't enough to fray poor Linda's nerves, the sight of a hawk sends the poor girl over the edge. Jim finally has to take matters in his own hands (for Linda's sake) and wallop her one. I like her sass but it's nice to remember how real men solved domestic road bumps back in the 60s. Guys get arrested for that crap now.

JS: But it takes a special bond to have a sympathy crash when your spouse noses their aircraft into the dirt. 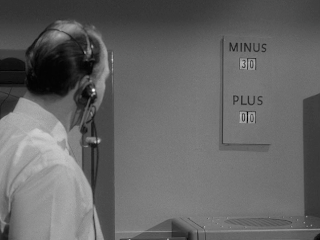 PE: I love the very professional countdown-o-meter they've got taped to the wall. Multi-billion dollar space program but $1.49 equipment.


JS: I'm just glad they opted to use stock cockpit control footage. I can only imagine the broomhandle controls the Projects Unlimited team might have assembled for Jim.

PE: Dig that run across the desert in the sweltering heat. Jim might be a macho test pilot but he runs like Barbara Rush in "The Forms of Things Unknown." A little hitch in his gitty-up, I assume. It's a shame there was no bus line running along that route (oh, but the bus would be frozen you say? what if the bus were caught in Jim's sonic boom as well?).

JS: I give them credit for raising the possibility that the characters were dead (and, in doing so, confirming that wasn't the gimmick). I think that might have made for a more interesting conclusion, particularly if they were joined by their flattened daughter. 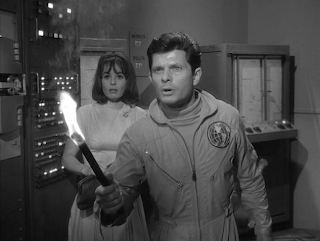 PE: Acting is uniformly dreadful this time out. Frankie Avalon was off with Annette, I assume, so all that OL could afford was Dewey Martin (The Thing From Another World). Martin looks off in the distance a lot with astonishment and says things like "C'mon, let's go to Mission Control, maybe we'll find the answers there." and "There's got to be a logical explanation, Linda" while looking at an entirely frozen world. He's Bobby DeNiro though, compared to Mary Murphy, who does little more  than scream at each new frozen sight, squishes her head between her hands, and say "Oh Jim, what's happened to the world?"

JS: I didn't have too much of a problem with the performances until they got to their long soliloquies. Then it was extremely grating.

PE: So, Jim's sonic boom caught his wife's car in its wake but not any of the local wildlife? I buy that.

JS: In all fairness, they managed to crash the fastest manned rocket and a car within 20 feet of one another without killing the operators of each. It was clearly a localized phenomenon.

PE: The still of little Janey on her bike shows evidence of a one-fanged vampire on the loose. 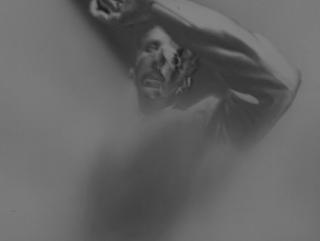 JS: I found this to be an interesting exercise, unique in that it was the couple sharing this experience so often relegated to a solitary character. The real missed opportunity came through the creepy introduction of Casper, the not-so-friendly ghost. He provided some very creepy visuals, and an interesting dimension to the story. I couldn't wait to find out more about how he came to be.

PE: Highlight of the show would have to be Ghosty's speech. For once, one of those long, rambling OL speeches about time vortexes and space continuums makes sense and is very effective, delivered rather creepily I hasten to add.

JS: Too bad that plot thread wasn't deemed worthy of tying off. Still, a marked improvement over the last two episodes.
JS RATING:

David J. Schow on "The Premonition" (Click on pages to enlarge): 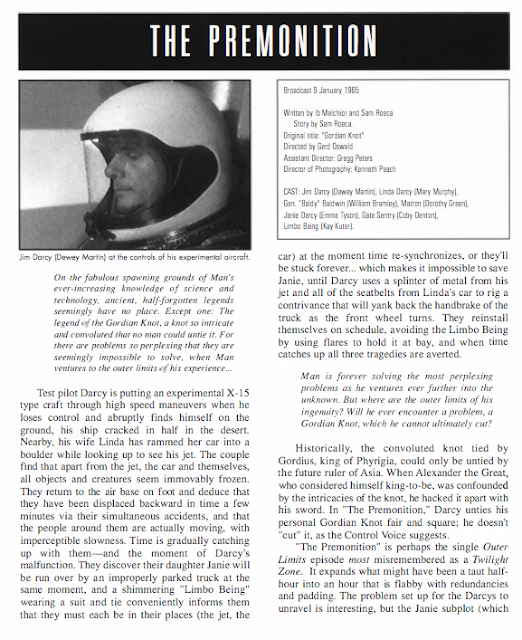 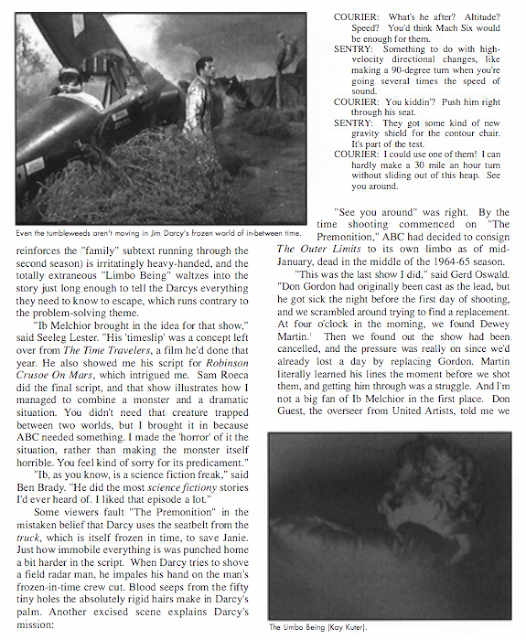 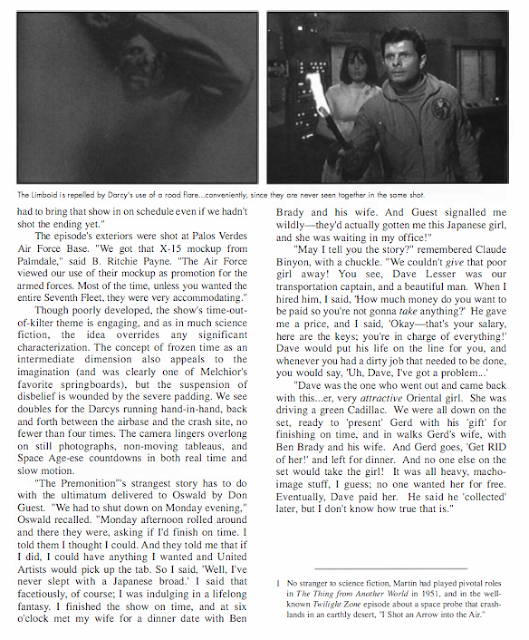 by Larry R and Ted R.

Darcy's flight didn't go real well,
Limbo Dude lives in surreal Hell.
Had Jim not stopped that truck,
Janie'd be out of luck--
They'd be scraping her from the wheel-well.

Next Up, the final episode... 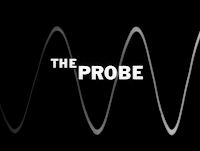