Spotlight on "The Brain of Colonel Barham"

by Tom Weaver
Recent media announcements that the Earth's population will hit seven billion later in 2011 pave the way for a brief discussion of "The Brain of Colonel Barham," The Outer Limits' brain-in-a-jar "ship in a bottle."
What is a "ship in a bottle"? Veteran screenwriter Ken Kolb taught me that that was Inside Hollywood's way of referring to a TV series episode that cuts every corner in order to rein in escalating production costs. If a few episodes of your series have gone over-budget, quickly throw together a "ship in a bottle" episode and get back on track. On (say) Voyage to the Bottom of the Sea, this would take the form of a story in which Capt. Crane finds the Seaview inexplicably deserted, and he wanders up and down endless corridors just to use up running time. On (say) The Wild Wild West, it'd be one where Jim and Artie ride into a ghost town, following strange noises from empty saloon to empty hotel to (etc. etc.). On (say) The Fugitive, it'd be one where Kimble and Insp. Gerard are trapped in a nearly airless mine by a cave-in, and sit on the ground and weakly converse for 40 of the 50 minutes. On The Outer Limits, it's a Donovan's Brain ripoff with all action confined to just a couple of nearly adjoining rooms at a scientific base. 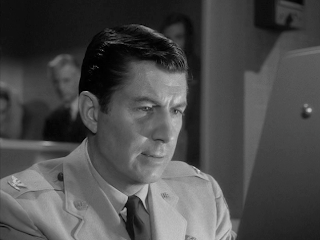 "Colonel Barham" has more of the flavor of a typical 1950s sci-fi movie ultra-cheapie than any other Outer Limits. The premise is that, to ease overcrowding on Earth, Man must start migrating to other planets--and, for no reason that's made evident, America's engaged in a race with Guess Who to be the first across that interplanetary finish line. A computer aboard an unmanned probe spaceship cannot possibly cope with unexpected emergencies, so scientists are turning to Colonel Barham (Anthony Eisley), an astronaut with a terminal illness that has demoted him from rocket ranger to wheelchair jockey. His general (Douglas Kennedy) asks him if he wouldn't mind checking out of Life's Hotel a few months early, so that his still-living brain can be extracted and put in command of the mission. It's asking a bit much, and yet the general doesn’t bother to drop his snarly schtick even during the conversation in question:

BARHAM (sardonic, snotty): Tell me something, general, how would I do [after I'm just a brain] with pretty girls?
GENERAL (a bit contemptuous): How you doin' NOW?
[Musical stinger] 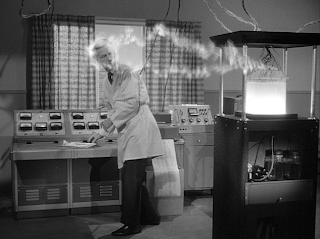 What no one seems to mind, or even notice, is that Barham is a philanderer and an egotist whose bitter rants are tinged with madness. A psychologist (Grant Williams) begins to have his doubts but is overruled; the operation is performed and now, in a scene that should have had Curt Siodmak phoning his lawyer, we see the titular brain in a large pulsating-with-light jar, while nearby stands a speaker (with spinning radar antenna atop) through which he talks; no Outer Limits Bear was ever such a bore. Somehow, we aren't trusted to learn how, Barham can now send out bolts of electricity (represented by the most rudimentary sort of visual effect). He can also impose his will on any visitor, making that person--at least briefly--his zombie-like slave. In short, everything—BUT EVERYTHING—begins to happen just as you knew it would. Once it becomes clear that Barham's Brain represents a danger, you also know that it doesn't stand a chance. What "monster," movie OR TV, was ever more helpless than a deranged brain in a jar in a little room on a military base?
Watching "Colonel Barham," the diehard horror hound of course thinks first of Donovan's Brain but it's actually more like a previous variation on that Siodmak yarn, the 1958 Paramount feature The Colossus of New York. There as here, the scientist (Ross Martin) who ends up Just A Brain is working to ease the problems of world overpopulation. Following a close encounter with a speeding truck, his gray matter is placed in a giant caped robot which (yes) now develops a contemptuous attitude toward mankind, can control minds and emit a death ray.
"Colonel Barham" skimps on the imagination and on thrills and on sets, and on just about everything else; but for allegiant fans of '50s sci-fi cheapies, 50 minutes is just the right investment in time to make in a Donovan's Brain takeoff with an extremely Monster Kid-friendly cast: Shrinking Man Williams, Kennedy (from Invaders from Mars, The Amazing Transparent Man, etc.), Peter Hansen (When Worlds Collide), Paul Lukather (Dinosaurus!), Martin Kosleck (nufsed!) and, best of all, Anthony Eisley, usually a self-effacing, joking sci-fi leading man (The Wasp Woman, The Navy vs. the Night Monsters), but here doing a standout job of establishing the bitterness, egotism and the streak of cruelty in Colonel Barham.
It hasn’t got an original idea in its brain, but it does have that cast and it's got pace--a livelier pace, in fact, than many Outer Limits episodes that are in all other ways better. So I've always liked "The Brain of Colonel Barham" a bit more than I probably should. 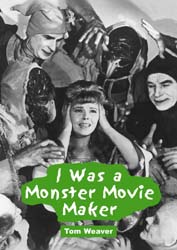 , Earth vs. the Sci-Fi Filmmakers

. He is also co-author, with Michael Brunas and John Brunas, of Universal Horrors: The Studio's Classic Films 1931-1946

, a book that should be on every genre fan's shelf. His latest is the forthcoming I Was a Monster Movie Maker: Conversations with 22 SF and Horror Filmmakers

. Tom has also lent his voice and knowledge to the audio commentaries for several genre films including The Wolf Man

, It Came From Outer Space

, Fiend Without a Face

, and our personal favorite, The Creature From the Black Lagoon

. In his spare time Tom is our fact checker. Tom is currently working on five books for release in 2011, which puts a lot of pressure on John and I. Now we'll have to learn the difference between John Carradine and Keith Carradine.
Posted by Peter Enfantino at 2:00 PM