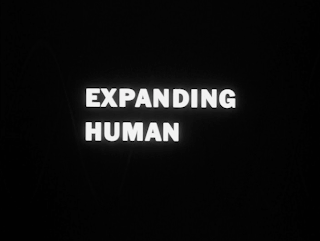 A strange serum that expands the human brain as well as the cheekbones may be behind a series of brutal murders and good nights at the craps table.

PE: The opening of this show gave me a "1950s Mexican Monster Movie starring Santo" vibe. Same kind of grainy photography (or is that the transfer?), nice shadowy hallway shot, and cheesy Mr. Hyde make-up.

JS: And are you saying that is a good thing or a bad thing?

PE: Classic OL moment: Lt. Branch (Doohan) talks Akada's manager into letting him into Akada's apartment. There the pair find the body of Akada, lying on his sofa. The camera gives us a very tight close-up of Branch's weathered face. "Oh boy," he mutters. Priceless! 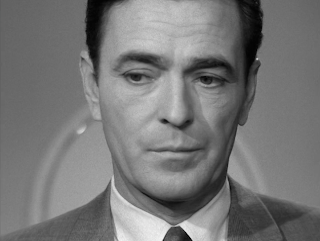 JS: Jimmy (Scotty) Doohan's brief appearance outshines Leonard Nimoy's OL cameo in "Production and Decay of Strange Particles"), and for that matter, The Shat's in "Cold, Dead Hands." As far as lost spin-off pilots of OL characters go, I could imagine watching The Adventures of Lieutenant Branch. "Oh, boy," would be his trademark line.

PE: Talk about good timing: Akada (Aki Aleong) wakes up on the morgue slab just before being eviscerated.  Good thing too because he had some dinner at Chico's just before lights out. Could have been nasty. As the slightly hyper Akada, Aleong does a good job of nearly stealing the show, along with Doohan, despite their brief air time. But someone's going to have to explain to me what the significance of the Akada character is. 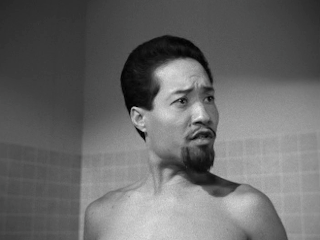 JS: If ever an actor playing a not-quite dead character should have stayed dead, this was it. He was convincing as a corpse—not so much as a living, breathing human being. And having him wake on the autopsy table as the ME's sharpening his scalpels is just plain silly.

PE: I'm still trying to figure out how Roy Clinton added a crafty Las Vegas gambler, a superhuman good Samaritan and a vicious night watchman murderer together to come up with the same guy. Isn't that stretching it a bit? And yet, Lt. Branch says he'll check it out. It's lucky Clinton didn't throw in the old lady who works the 7-11 on the corner of 15th and 8th Street in Brooklyn. (I'll just add, after watching the entire show, that maybe Clinton was going off some bit of memory left in his brain from his Vegas jaunt. -PE) 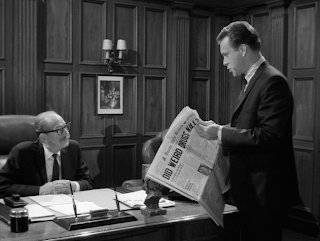 JS: Yeah, that puts Lt. Branch in the caliber of the Thriller cops we got to know so well. Although there's an interesting party game to be made of that scene. Play Alibi! I know you saw me at the scene of the crime, but here's what I think happened: A 93-year old lottery winner from Des Moines was involved in a drive-by shooting in Oakland, and continued their crime spree by breaking into my next door neighbors house and killing his wife. All wearing the clothes he snuck out of my closet. Does that seem reasonable???

PE: Am I the only one here who thinks Keith Andes is a dead ringer for Jeff Morrow in This Island Earth? 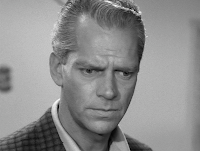 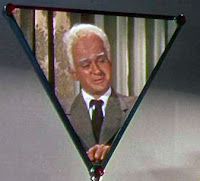 JS: You may be onto something there...


Clinton: Now then, if you'd care to sample this, I'll promise that you'll be charmed with its effect. You may find it slightly reminiscent of cucumbers. A characteristic I'm unable to account for at the moment.. but it's... not bad at all! 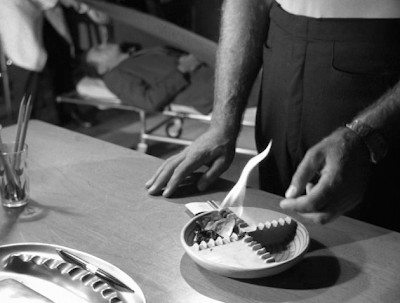 PE: More L-OL: After Clinton unceremoniously drops dead from his bullet wounds, Peter burns the formula in an ashtray in Clinton's apartment just as the brilliant detective and sleuth, Lt. Branch ,walks up and says "Well, we've torn this place apart and can't find any notes for the formula. Any ideas? "(He leans over and lights a cigarette off the still burning papers). "I'm stumped!" 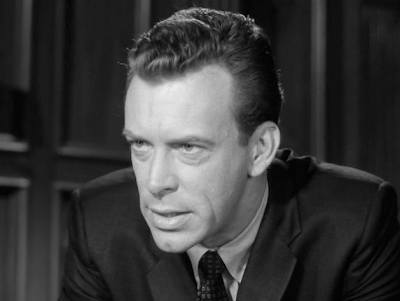 JS: I'm surprised you didn't mention the return of your Hydra's Teeth theme from "The Invisible Enemy" when evil Clinton was around. Did anyone else think, when the landlady comes running out of Akada's apartment, that we were about to launch into Lalo Schifrin's Mission: Impossible theme? I have to admit, I'm a big fan of Skip Homeier, who played opposite Don Knotts in one of my all-time favorites, "The Ghost and Mr. Chicken." I thought they did a decent job hiding 'Clark Kent' Clinton behind the 'Superman' Clinton make-up. 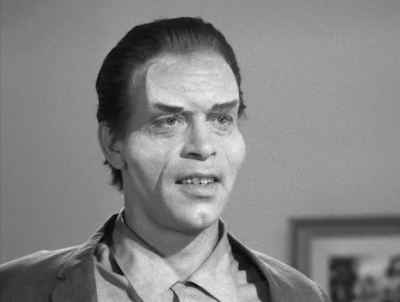 PE: Where has this show been all my life? "Expanding Human"would have fit in nicely with the series of horror flicks released in the 1950s: Son of Dr. Jekyll, Daughter of Dr. Jekyll, Blood of Dracula, Monster on the Campus. Those all had better monster make-ups (Clinton/Hyde looks like freakin' Arnold Schwarzenegger!) I'll admit, but this is a fun little time-waster. There's never really any doubt who the crazed killer is. And the scenes of Clinton/Hyde roaming the streets and entering an office building without drawing notice (he even talks to a secretary at one point without so much as a gasp!) are a hoot. Is it my imagination or does the transformation even change his shoes? This episode has all the lapses of logic of those nutty monster flicks and provides the same kind of entertainment. I'll roll this one on a triple bill with "The Invisible Enema" and "Cold Feet, Warm Intestines" the next time the ladies are over. The only disappointment, of course, is that Clinton doesn't try to colonize Mars in the end.
JS RATING: 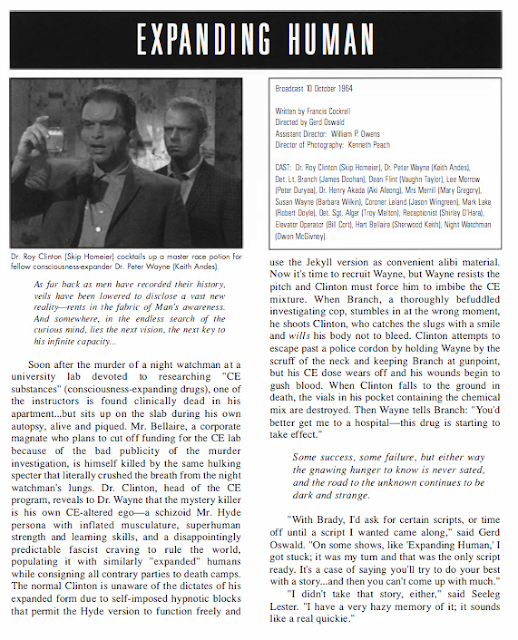 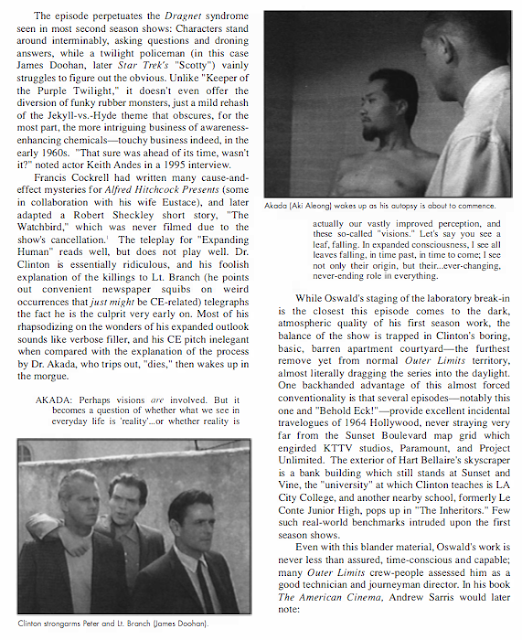 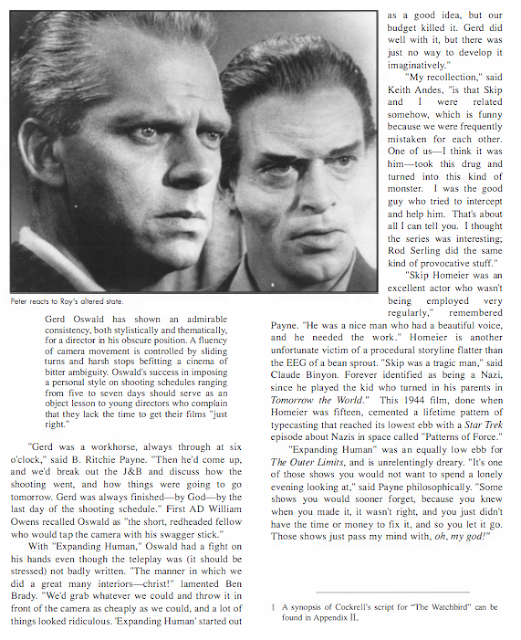 Doc Clinton has cheekbones a-swelling
And a Nazi agenda a-jelling
But Scotty shoots first
And hits him the worst
The ending? Well, that would be telling.


Be sure to check back later today for Larry Blamire's Spotlight on "Expanding Human."

Posted by Peter Enfantino at 6:25 AM