by David C. Holcomb
At some point fairly early in the life of We Are Controlling Transmission, I realized that I’ve moved on from The Outer Limits. It’s not a lack of love or respect: the show is a genuine classic, something typically brilliant and persistently unique. Its construction, explicated with intelligence, grace, and diligence by David J. Schow, reflects a hugely admirable and equally exhausting multi-player, hyper-creative mania in the face of bottom-line inertia. Individual episodes reflect the brilliance, or they don’t but abide fully somehow. Monsters crash through the woods intentionally or inadvertently (sometimes both); hearts are opened and minds expanded, and hearts are crushed and minds do evil; the stories shake and indulge you. Above all, The Outer Limits embraces the truths of being human – the beautiful ones, the ugly and stupid ones – with care but never blindness. This stays with me: it always will. I’m grateful for it. And I’m grateful to John Scoleri and Peter Enfantino for sustaining attention to the heady excellence that is this series; as blog hosts and viewing companions, they’ve remained balanced, funny, and usefully iconoclastic throughout.
Still, I’ve seen the episodes dozens of times now, and I’m a middle-aged man who is uncomfortable with nostalgia – keen to focus on what is here and now in both the world at large and in the fantasy-based visual arts reflecting it. To the former, which so memorably inspired Leslie Stevens and Joseph Stefano in their day, it looks like bad news: we may be, like Professor Mathers’ evolution booth in Cathy’s sentimentalist hands, moving backward instead of forward. To the latter, better news: as examples, Ron Moore’s anti-nostalgic Battlestar Galactica reboot and Russell T. Davies’ cunningly transgressive Torchwood: Children of Earth are two recent television shows reminiscent of The Outer Limits in style and themes addressed; adding power, both are admirably sovereign and modern as well. In movies, Gaspar Noé’s eviscerating soul meander Enter the Void and Lars von Trier’s ball-crusher Anticristo tread the same simultaneously heartsick and upsetting ground as the series, and with equal visual aplomb and nerve. All isn’t lost, then – we may collectively go to hell in a handbasket, but we’ll have good cinema with us as we do so. If Stefano would most certainly not approve, at least he might dig the irony, and maybe the justice. Stevens would likely be looking up at the stars all the way down and miss the nastiness of the descent. Good call. 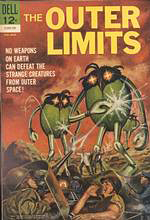 None of this is tangibly connected to my possession of the Dell comic books loosely (excessively loosely) based on the Daystar/Villa di Stefano show. I own the entire run of eighteen issues – without a doubt partly out of nostalgia, but also rooted in a fascination with accidental art, the kind that happens despite itself and only as seemingly disposable things get old. At one point these artifacts qualified as an investment, when pop culture fetishists such as me could afford to trade comic books for serious money. They’re still worth a bit: in these plutocratically-induced hard times, probably about a month’s car payment. But nothing serious: that they are not. Maybe that’s why I keep them around during these too-serious times. Someday I suppose I’ll move on from them as well, and I confess my hope that a good reason to do so comes along soon.
In any case, here they are – cue Frontiere’s grabby, pulsing intro: from the inner mind… to the outer limits.
The Boy Who Saved the World! 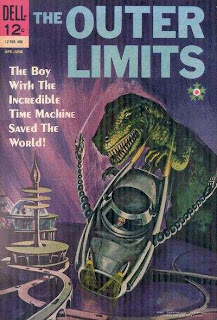 Any attempt at likening the comic books to the television series is a fool’s errand – these read like the result of a head-on collision between low-budget 1950s bugshow drive-in fare and Boys’ Life magazine. Still, the allure of both remains intact in the aftermath: the content, while bitterly divorced from Stevens’ and Stefano’s show, retains the anesthetic properties of lamebrain fantasy and the charm of playing under the streetlight on a summer night. In other words, not grand hoopla but a kick in their own right – as an entity, not consistently reflected in any single feature or issue; still, the big bold letters of the series’ opening and the funny proprietary touch of the Daystar logo loitering in the corner draws the viewer into becoming the reader. The charms are relative and the rewards may be narrow, but it says so right on the covers: The Outer Limits.
Dell Comics was in flux at the time of the release of this TV-based title, part of their anchor ‘licensed material’ line along with such other oddities as brainless kiddy adaptations of Roger Corman’s Poe films and entirely superfluous renderings of Hanna-Barbera cartoons (The Flintstones never really called for transliteration to cheap paper stock). Cut loose from big Western Publishing in 1962, Dell fractured, resulting in eleven years of gradual decline and admirable but ultimately foolhardy experimentation. Case in point: attempting to cast classic Universal movie monsters as superheroes, a baffling oops. Eventually splintering into Gold Key Comics – where adequately-drawn versions of Rod Serling and Boris Karloff found long-term homes – the stalwart Dell became a shadow of its former self, ultimately passing in 1973. Gold Key became Whitman, essentially a publishing house for children’s comics titles, itself dying in the mid-1980s. 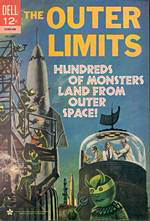 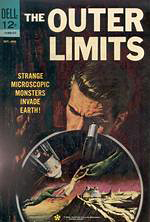 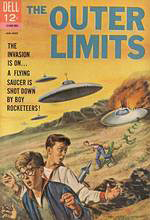 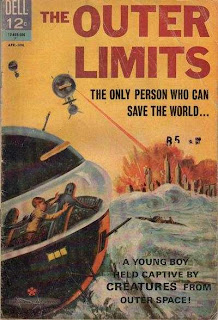 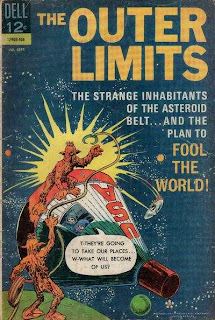 What Strange Creature Is This?
The Outer Limits was published early in this entropic process, surviving the worst but the decay showed: if there is any similarity to the show, it’s in the fact that there appears to be analogous first and second ‘seasons’ to the comic, driven to an apparent extent by faltering commitment and finally by utter cheapness of intent and execution. Sound familiar? Early issues (one through six) featured painted covers; though they varied in content from enjoyably goofy to genuinely interesting and childishly threatening, all were unique and memorable. Inside, writer Paul S. Newman and artist Jack Sparling, both lifelong comic book worker bees, conveyed the necessities with a comforting competence that aimed true at its intended audience: boys, somewhere between their last bedwetting and their first shame-faced self-gratification session – generally speaking, the everlasting time-space of the comic book, though there appears to be about a forty-year continuation of this cycle in modern times (trust me). 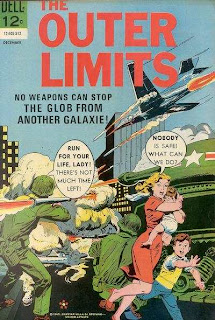 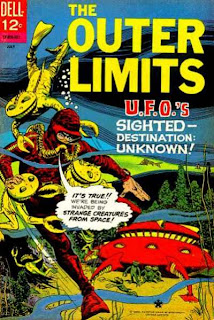 From issue seven to sixteen, the decline showed. It wasn’t rapid – the middle period of the run has a lot of charm, including issue ten, in some ways an elaborately-plotted high point: creatures from ancient mythology are discovered deep within the earth by the requisite rugged adventurer and his saucy babe companion. The mythic spawn turn out to be refugees from outer space (yes, a spoiler), and raucousness ensues. When my brother Mark and I were about eleven years old, we found this issue in the cast-off box of a musty comic book shop in Grants Pass, Oregon, a high point of our funky early 1970s summer. This goes some distance in explaining my allegiance to the issue and the tale, very probably more than its actual quality. Whatever the case, it remains a genuine hoot. 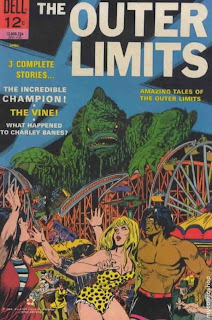 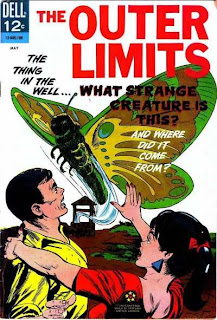 Is Anyone Safe?
Likely fighting a lack of the safer confines of either character-driven or multi-story comic books as much as any other deficit, Dell’s The Outer Limits tried to adapt with issue twelve forward, which featured a collection of unrelated shorter tales and the second-worst cover of the entire run. Revisiting the notion of accidental art, this period also produced one of the most enjoyably silly issues and covers with number fifteen, which flirted openly with Marvel/DC monster-comic territory (my other comics fetish, by the way). Collaborators Newman and Sparling both went on to contribute to the two big publishers – where both had also started their comic work in the late 1930s. 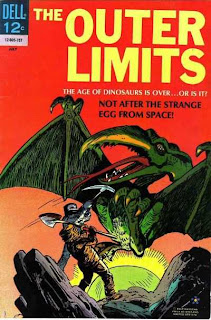 A stumbling finale spanned three issues, with inertia-ridden number sixteen presenting the least appealing work of the entire span, from front to back cover. This gave way to reprints of the first two issues re-numbered as seventeen and eighteen; the covers were, wisely, also reprinted versions of the pleasing originals. In this, the whole endeavor faded out like the series: a drained, draining lack of effort and dedication representing a weak capstone to something better. You can almost sense Ben Brady and ABC Television behind it somewhere. 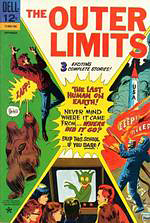 The Plan to Fool the World!
Charm is relative, as I mentioned. Dragging these odd remnants out drives that point home. Corpus earthling, bagged and tagged: stiffening, yellowed leftovers from other times and obsolete media. Have you seen modern comics? They’re a different breed than Dell, sharper in story, art, and paper stock and about as warm as that sounds. Have you watched television lately?
Makes you nostalgic.
Never Mind Where It Came From: References
Dell Comics, Wikipedia: http://en.wikipedia.org/wiki/Dell_Comics
The Comic Book Database: The Outer Limits: http://www.comicbookdb.com/title.php?ID=19020
Comic Vine: The Outer Limits: http://www.comicvine.com/the-outer-limits/49-2184/
Images used under copyleft fair use policy, and with love.
Posted by John Scoleri at 2:00 PM