The Brain of Colonel Barham 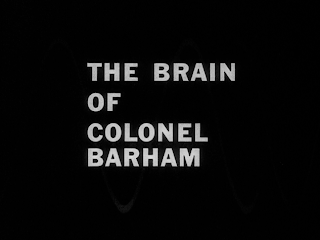 Terminally ill astronaut Barham (Eisley) volunteers to have his brain extracted from his cranium so it can make the long journey to Mars and beyond.
PE: The Donovan's Brain of Colonel Barham From Planet Arous.
JS: After a promising start featuring a rocketship blasting across the sky en route to a lovely  alien landscape painting (albeit one flown by a drunk-PE), we're treated to an episode that plays out in a few similar looking rooms on good old Earth. 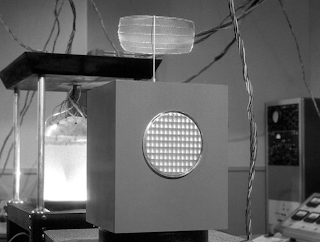 PE:That's a pretty pathetic brain in a jar. Are you seriously going to tell me that Projects Limited couldn't whip up a brain that looks like a brain? (ah, technology displays the likes of which we haven't seen since Season One! -JS) .Looks more like the Ham of Colonel Barham (when they let you see it that is). Which segues rather well into my judgment of the acting...

JS: I was surprised Grant (Shrinking Man) Williams was almost unrecognizable to me as Major McKinnon.

PE: Lots of genre vets here: Martin Kosleck, Grant Williams, Douglas Kennedy,  and Anthony Eisley all saw creature battle at one time or another in their careers (I'll let genre expert Tom Weaver fill in the parentheticals for you in this afternoon's spotlight). Wesley Addy (as Dr. Rahm) could have stepped right out of the witness box of The Verdict where he played a smarmy, pretentious doctor just as he does here.

JS: And no amount of vets could help make this a winning episode. 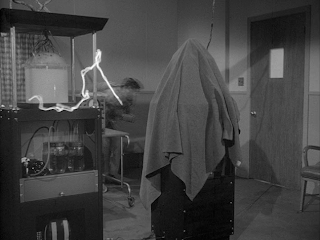 PE: Fake laser beams from the brain alert! And, while I'm on the subject, can someone tell me why exactly a de-bodied brain can spit out electricity? The scientists never seemed to question the phenomena so should I?

JS: The boiled brain has an enlarged pineal gland that acts as both a channeling receptor and laser cannon. Without that, it would just be dead tissue in a mason jar. How boring would that be?

PE: L-OL dialogue: Dr. Rahm (Addy) informs the big brain that it's getting overheated and the stylus is "off the chart."

Barham's Brain (delivered in a robotic monotone): Don't talk to me like that doctor I gave you an order I expect you to carry it out immediately!

Rahm gets zapped by the brain and in the next scene, when Jennifer and Major Locke pass the possessed Dr. Rahm in the hall, she tries to engage in a conversation with Rahm:

Locke: He's a scientist, Mrs. Barham. They walk around in a daze most of the time.

JS: As did I, following this episode. 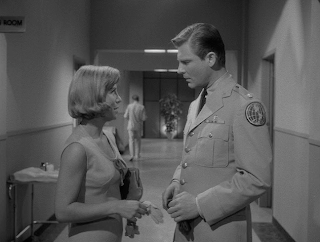 PE: Just a few hours after the husband she loves more than life itself is de-brained, Jennifer 's hitting on Major MacKinnon.
JS: Can you blame her? This was one of TOL's few forays into a less than perfect marriage portrayal.

PE: Sounds like Harry Lubin has been raping and pillaging the Universal-International village again. Bum-buuuumm! Much to-do is made of how to dispose of the all-powerful brain at the climax. A well-placed fastball would do the trick. I'm still trying to figure out how the lab caught fire with one rifle bullet (and then put itself out within a matter of seconds).

JS: One more reason why the boiled brain has to have some form of range attack. If you could just walk up to it, pick it up and flush it down the toilet, it wouldn't really matter how powerful said brain was, right?
JS RATING:

David J. Schow on "The Brain of Colonel Barham" (Click on pages to enlarge): 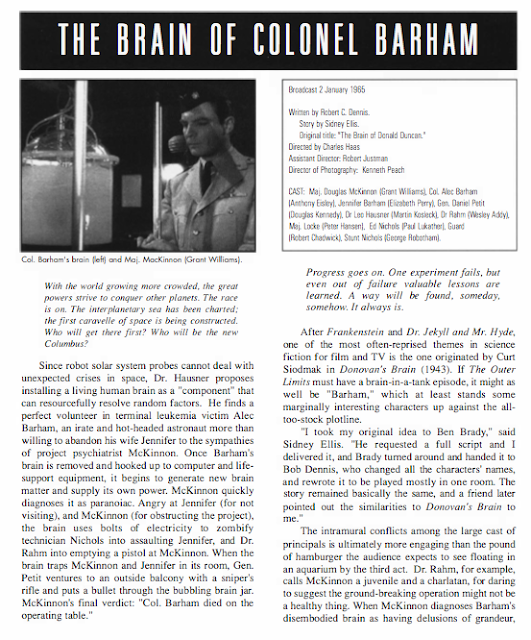 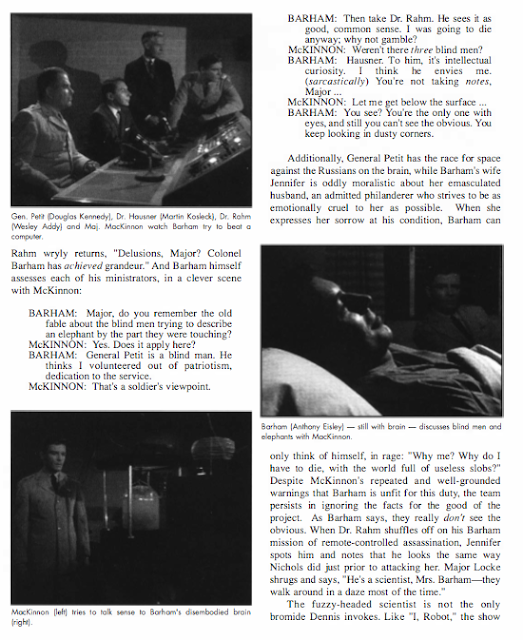 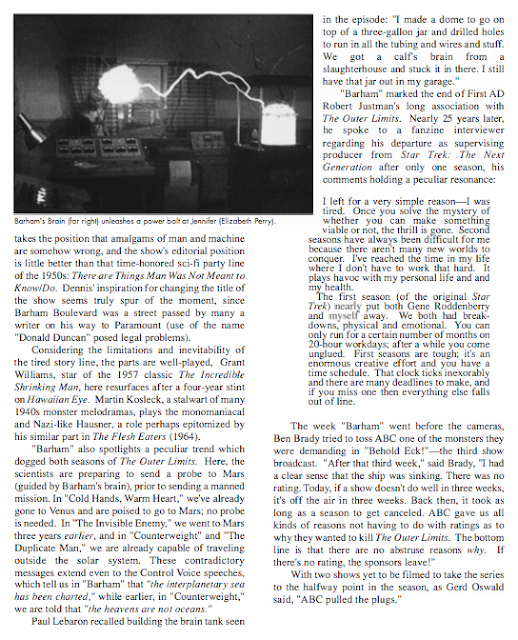 Be sure to check back later today for Tom Weaver's Spotlight on "The Brain of Colonel Barham." 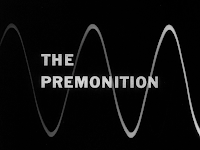