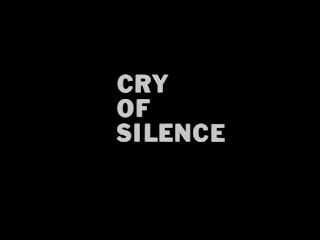 Andy and Karen Thorne (Albert & Havoc) are searching for their dream farm in the middle of a desert (best place for a farm, by the way) when they hit a boulder. After Karen takes a fall and hurts her leg, they are set upon by intelligent killer tumbleweeds (herewith referred to as T.W.s). Mayhem ensues.
JS: And here we have the lost pilot for Brown Acres...

JS: Herein lies the beauty of viewing some of these shows for the first time. When the first tumbleweed rolled into frame, I too thought of "CE," and jokingly said to my wife, "Killer tumbleweeds!" Then when they ran into the rock, I said, "Killer rocks!" And the next thing I realize, we are in fact watching a killer tumbleweed episode. Aces!

PE: Another of those episodes that I'd give John's right testicle to be a fly on the wall during the pitch:

Writer: Ya see, there's these two people who break down in their car in the desert and they're attacked...

Suit: Hey, we still got that big cloudy shit that came out of the vacuum cleaner around here somewhere. Or how about an ape suit? We gotta use something that's already here on the lot. The budget for special effects got eaten up by the Bewitched Halloween Special.

Writer: That's the beauty of it. We're using...

Writer: The tumbleweeds from "Corpus Earthling."

Suit: Brilliant! Cheap and brilliant! Next week we'll use the floorboards we stole from The Bradbury Building. Haunted wood!

The entire thing could be written off as parody if it weren't so damned serious. The sight of the two stranded lovebirds lighting a fire and watching the T.W.s pull back in fear is a beverage-spewer. Get it all out of you quick because the next scene of a stage hand obviously throwing T.W.s in a pile as if they're jumping up may make you spew again. There are actually close-ups of the T.W.s approaching threateningly as if this were Earth vs. The Spider or Them! 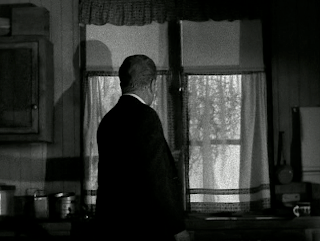 JS: How are you leaving out the most obvious progeny? This I Am Legend inspired episode was yet another precursor to Night of the Living Dead. Of course I always joked in that movie how zombies are extremely flammable—whereas here, when their campfire is surrounded by Tee-dubs and they're running out of firewood, that they use to keep them at bay, it doesn't initially dawn on them that there's kindling right in front of them just waiting for a spark? 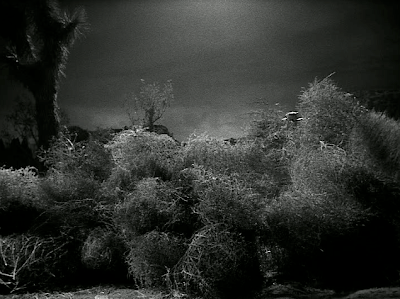 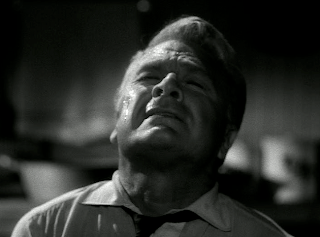 PE: Neither of the actors really seem to be up to the weight of their roles. Havoc's Karen Thorne is having the mother of bad days but she alternates between calm and quiet and screaming like a banshee within seconds. Albert does the best he can while dancing around, tumbleweeds tied to his legs, thrusting one into his face as if it's attacking him. His big scene (when he's possessed by the alien being and becomes its voice) looks as though the director is off-camera yelling "Push!" The fact that either of them can recite their lines at all without screaming into the camera "I won't say this! I'm an actor" I've done Shakespeare" is a small miracle. The pay was lousy so the catering must have been the ticket.

JS: I'm hoping our WACT Stooges will compile a list of 50s monster movies that rely on the 'hold it to your face like it's attacking you' technique.


PE: So are we to assume the tumbleweeds ate all the birds? Hahahaha, I'm sorry, I just got to the part where Lamont the farmer (Hunnicutt) utters the immortal lines:


Lamont: It seemed there's more tumbleweeds around than usual. But that's all. Then they started gettin' bigger, about the time my wife started missin' some chickens.

Lamont: Maybe. Didn't occur to me at the time. Figgered it was a fox. But a fox couldnt'a made off with a full grown sow.

Andy: Well, didn't you report it or talk it over with your neighbors?

Lamont: No other farms within ten miles of here. Anyway, they wouldn't believe me. I didn't believe it myself until the milk cows disappeared.

That last line was what I was trying to shout as I pissed myself laughing. So, do the T.W.s have digestive systems or do they just haul the sow off and rip it to pieces. It's so much fun they decide to take on Elsie.
JS: Lamont's tale of love reminded me of the children's classic "I know an old lady."

PE: Boy, it's not just the props that keep getting overused, it's the music too. That "Dark Shadows"-like theme is here, as is my favorite Bernard Herrmann swipe (illustrating yet another spewer as killer frogs leap—read that as are thrown—at Andy and Karen).

JS: One of my favorite over-the-top scenes! I would love to see behind the scenes pics of the PAs chucking rubber frogs at the talent. Somebody got in some good headshots. And I love the shot of them prepped and ready to fight off the frogs. 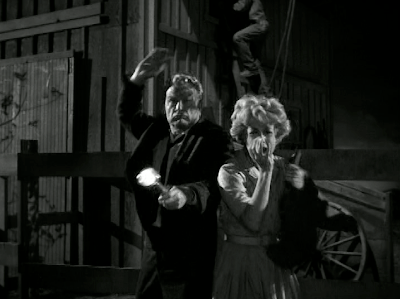 PE: It is interesting that the "force" begins using other means of destruction: frogs (my first choice of a weapon) and boulders are "possessed" before the end of the show but why wouldn't the "force" just go ahead and take over something more sensible like the tractor Andy's hanging around or the farmhouse they're hiding out in? I know, I know. Nuances. 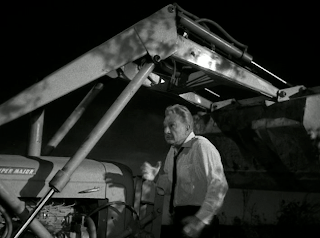 JS: My wife flinched at the scene when she thought the tractor was coming down on Andy's head. Of course, Eddie Albert did, too.

PE: L-OL dialogue: Andy (Albert) says to his dowdy wife (Havoc): "We get back to town and I'll give up the idea of living on a farm, honey."

JS: My favorite Eddie Albert bit was when he describes the situation, "Other than attacking us, they appear like tumbleweeds." And I'll be damned if you don't believe he's completely serious. Pure brilliance.
JS RATING:

David J. Schow on "Cry of Silence" (Click on pages to enlarge): 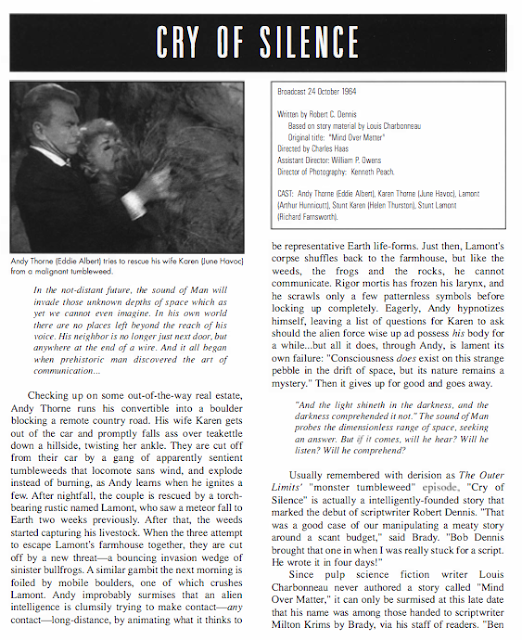 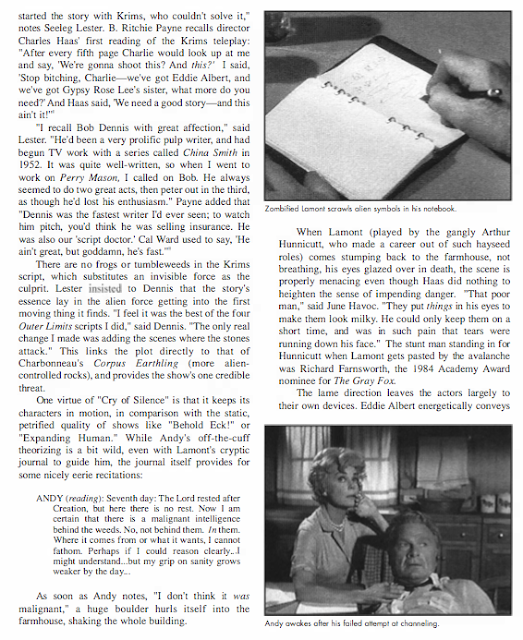 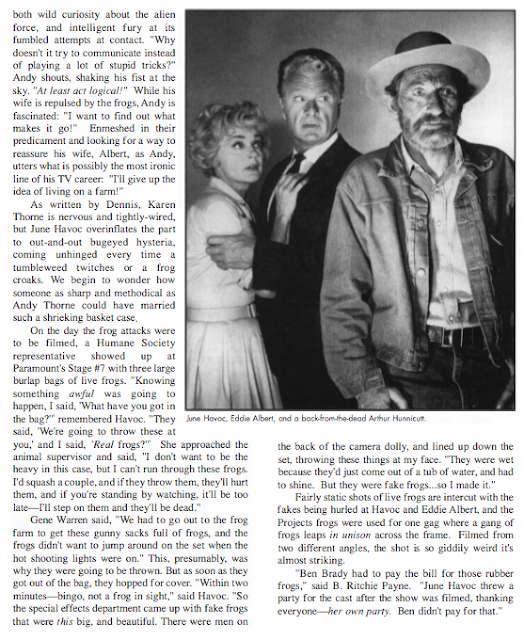 CRY OF SILENCE!   By Larry R 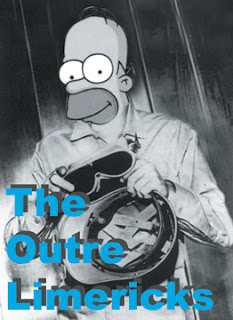 THE FORCES OF NATURE COLLUDE
WHEN ANDY AND KAREN INTRUDE.
'TWOULD BE HELPFUL IF ANDY
HAD a GALLON OF BRANDY
TO KEEP HER FROM COMING UNGLUED.
INSTEAD OF DRAMATIC LINE-READINGS,
WE'RE STUCK WITH HYSTERICAL PLEADINGS.
IT'S VERY DISTRACTING
WHEN THE HEROINE'S "ACTING"
WREAKS HAVOC UPON THE PROCEEDINGS.
YES, JUNE IS THE EPISODE'S SHOCKER,
AND IF I WERE ANDY I'D SOCK HER.
BUT WHEN THE DESERT EXPLODES
WITH RUBBERIZED TOADS,
IT'S LAMONT WHO GOES OFF OF HIS ROCKER
THOUGH HE PATIENTLY CALMED AND CONSOLED HER,
ANDY'S WIFE IS STILL FREAKED BY THAT BOULDER.
SO HE'S NOW IN A TRANCE
SEEKING ANSWERS PERCHANCE
WHILE LAMONT IS BEGINNING TO MOULDER.
BY PLUMBING THE DEPTHS OF HIS MIND,
IT SEEMS ANDY'S RESCUED MANKIND.
SO, WITH REGRETS TO BOB NOLAN*
I THINK WE'LL GET ROLLIN'
AND LEAVE THIS DISASTER BEHIND.
*Composer of "Tumblin' Tumbleweeds"


Be sure to check back later today for Gary Gerani's Spotlight on "Cry of Silence."