In Praise of Bob and Adam

by David J. Schow
Bob Dennis (1915-1983) was not only a trench-warfare television scenarist, but an asset to The Outer Limits Companion — it was Bob who, via personal appeal, finally convinced Ben Brady to go on the record for the book.  He wrote more than 500 TV scripts, including 31 Hitchcocks, 21 Perry Masons, 19 installments of Dragnet 1967, 15 77 Sunset Strips, 7 Wild Wild Wests,  and post-Outer Limits worked for Leslie Stevens on two episodes of Search in 1973.  You could look him up.  (His daughter Julie, as “Jules Dennis,” is today an equally well-known animation writer.)
Bob also concocted an Outer Limits scenario that was so appealing that I had to explore and expand it, which case we’ll get to in a moment.
Who, Robot?
Apart from Trent in “Demon With a Glass Hand,” Adam Link is the only actual robot ever to appear in the original Outer Limits — that is, the only robot who looks like a mechanical man.  (Android malefactors were the centerpiece of an unfilmed first season script, “Little Mother of All the World” [written by Richard Newman, from a story by Lou Morheim & Joseph Stefano; revised by Stefano].)
Dennis tackled this adaptation of the Eando Binder series of short stories, deriving the plot most heavily from the first two:  “Adam Link, Robot” (Amazing Stories, January 1939) and “The Trial of Adam Link, Robot” (Amazing Stories, July 1939).  From the first, Adam is a sympathetic, intelligent automaton who evinces human-like emotions.  Put on trial for the murder of his creator, Adam’s predicament planted The Outer Limits directly into the realm of Perry Mason:  Does Adam have human rights?  If so, is he a machine?  And if not, why is a machine charged with murder, a human crime?  Reasonably engrossing and adequately science-fictional (in an almost classic, Campbellian sense), the episode's melodramatics mute the more intriguing moral issues.  It seems simultaneously restrained, yet top-heavy with phony, ill-timed "climaxes."  Howard Da Silva, though, is an absolute joy to behold as defense attorney Thurman Cutler, a character invented by Dennis, and played by Da Silva as a crotchety misanthrope straight out of the casting call for Inherit the Wind.
This episode is also responsible for the confusion that persists, to this day, between the Eando Binder "Adam Link" stories and Isaac Asimov's "Positronic Robot" stories, first grouped under the I, Robot moniker in a 1950 Asimov collection.  The Binder brothers, Earl and Otto (hence, "E-and-O," although Otto reputedly wrote the Adam Link stories solo) collaborated on the premiere Adam Link tale, "Adam Link, Robot" in 1939, preceding Asimov's debut robot story, "Robbie," by a year.  In "Robbie" (retitled "Strange Playfellow" by Frederik Pohl, then-editor of Astonishing and Super Science Stories), Asimov introduced his cornerstone concept of the Three Laws of Robotics, to countermand the pulp trend of portraying machines as devices that could only run amok.  (The behavioral inhibitors programmed into Robby the Robot, in Forbidden Planet [1956], as well as his name, are a conscious nod to Asimov by the filmmakers which demonstrates how prevalent the idea of the Three Laws had become.)  The central notion of "Adam Link, Robot" — a mechanical man on trial for murder of its creator — was the hook for the Outer Limits adaptation, confusingly titled "I, Robot," probably because that title was punchier and more declarative.  (Asimov's original title for his collection was Mind and Iron; it was changed to I, Robot by his publisher, Martin Greenberg of Gnome Press.) 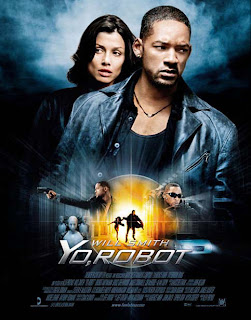 The 2004 film, I, Robot, employs the same basic plot as the first Binder story — a robot has apparently murdered the man who created it — and derives from an original Jeff Vintar script, Hardwired, which was later augmented by (rather than based on) Asimov's Three Laws, plus several characters from the Positronic Robot stories.  Examination of all the source material reveals the central nonhuman character of I, Robot, Sonny, to be pure Adam Link.  Asimov and the Binders wrote their robot stories synergistically — each admired the other — but the Positronic Robot stories are mostly hardcore puzzle-solvers, while the Adam Link tales deal with human rights issues.  It's not difficult to see how history got the two mixed up.

Producer John Mantley (the man responsible for “Behold Eck!”) had courted Isaac Asimov for the feature films rights to I, Robot as early as 1958.  He faithfully renewed the option for two decades, and by the late 1970s, the project lurched to life again, and throughout 1978-79, Harlan Ellison wrote a fullblown feature film adaptation for Warner Brothers.
Which went nowhere.
Possibly apocryphal side-story:  In 1977, the Alan Parsons Project released their second album, I Robot, purportedly based on Asimov’s stories, but were unable to acquire rights to the title due to the above movie project.  The “apocryphal” part comes in the forms of citations that in order to duck around this legality, the band and its assigns merely deleted the comma from the title.  Except that, since the 1950s, “I Robot” (no comma) has been cited as an alternate title for “Adam Link, Robot.”
THEN came the 1995 remake of “I, Robot” for the resurrected NOTer Limits series, wholly enabled by the stunt casting of Leonard Nimoy (under the direction of his son, Adam Nimoy) in the Thurman Cutler role.  Cyndy Preston played a grating version of Nina Link (here renamed “Mina”); as opposed to his hyper-caffeinated Jud Ellis, Nimoy here sleepwalks through the Cutler role.  Both Nina/Mina and Thurman Cutler were creations of Robert Dennis, who received no credit on the reboot, which was scripted by Alison Lea Bingeman.

During the prolog, we see Adam kill Dr. Link.  This was a not-disinteresting twist — Dr. Link was in the process of “lobotomizing” Adam so the robot could not be used for nefarious purposes by military subcontractors; Adam thus had a “human” reaction and acted in self-defense — but it deep-sixes the idea of a mechanical man becoming wrongly accused because, well, he looks like a monster.
The episode also carbon-copies the bar-bending scene, the sequence of Adam berserk in the courtroom, and the ending, where Adam saves the prosecuting attorney from getting flattened by a truck.  In 1964, Adam was found guilty; in 1995, he is pronounced innocent and remanded to custody of the state.
Similarly, in the 2004 I, Robot, Sonny kills the Dr. Link character (“Dr. Lanning”) because Lanning programmed him to, a rather convoluted way of exposing a fascist conspiracy set to unfold when a new generation of robots arrives to threaten human freedoms.

Dennis also wrote a never-filmed original for S2:
The protagonist is a boy living on a farm in the rural Midwest.  Outcast and ignored, his only friend, a little girl, moves with her family to California. The boy is alone until one night he sees a shooting star crash down into a nearby field. He discovers the remains of an alien probe, sent to Earth on a trial basis with a cargo of various samples of animal life native to the other planet. The boy saves the bizarre-looking creatures, harboring and nourishing them. The animals reciprocate his affection and become his "pets." The local hicks get wind of the boy's little zoo and vent their paranoia by killing all the creatures. A school teacher tries to comfort the boy by telling him, "At least this means we're not alone."
The story was vetoed by Ben Brady because it depicted the farmers slaughtering the alien animals.  (Even though, the previous year, blowing up a hundred Zanti Misfits was okay because, well, they were criminals!)
Had it been filmed, I think it might have been a capstone for S2.  I never did get to see Dennis' complete version and don't know if it was a script, or merely notes, a full treatment … or if it even had a title.  (Dennis had died by the time I got around to delving into this.)  So I wrote it myself, in 1999, as a short story titled "Watcher of the Skies," with the proper grace nods to Bob.
Marketwise, "Watcher of the Skies" was a dismal flop.  Too science-fictiony for the horror markets, not science-fictiony enough for the science fiction markets, not weird enough for Weird Tales, less amazing than Amazing required, too soft for the punk/edge market, too wimpy for the goth markets, way too dense for Young Adult venues, anti-sexy insofar as adult markets ... and too long for most "short" story markets.
It's available in my collection Eye (Subterranean Press, 2001).
You can read it here.
Posted by John Scoleri at 8:13 PM